This blog will provide you with some advice to help you ‘nudge’ your people to give their feedback that’s rooted in behavioural science, rather than “what’s worked for me”. This is because specific tactics that work in one organisation might not work so well in another.

But, what is a good survey response rate?

Many different sources suggest that for an annual survey, above 70% is good (though it still feels kind of arbitrary), but for other forms of employee feedback such as pulse, you should expect less. The truth, however, is rather more nuanced and contextual. I’ve worked in very different large organisations where response rates were typically over 90% and the reasons for that are rooted in culture, past experiences with employee surveys, whether they were perceived as important and, crucially, line manager support.

Why are response rates different for different types of survey?

There’s a lot of debate about whether annual engagement surveys are dead and should be replaced by Pulse or other forms of continuous feedback, but we’re cautious about taking a binary point of view on this. While the trend is towards Pulse, the reliability that comes with higher response rates is a good argument for annual surveys. That’s why - [like Josh Bersin] (https://joshbersin.com/2020/08/is-the-employee-survey-dead-nope-its-becoming-smarter-by-the-minute/) - we believe that annual surveys have their place in the 'employee feedback mix’ and shouldn’t be ruled out.

At Facebook, where 95% of employees fill out their engagement survey and 61% provide written comments, they believe that the survey is seen as something that’s important and is taken seriously as an opportunity to be heard. That’s certainly food for thought.

How to boost your survey response rates with Behavioural Science

Simply put, responding to an employee survey is – and must be – an act of volition. If not, we would fully expect employees to find their own way of exercising autonomy by spoiling the data. So let’s rule out coercion as a viable tactic up front! How can we use behavioural science to encourage people to participate in surveys, without feeling undue pressure?

The COM-B System of Behaviour

One of the most widely accepted developments in behavioural science is the COM-B system of behaviour (developed by Michie and colleagues - image below). COM-B which represents the Capability, Opportunity and Motivation behind Behaviour, was originally developed in the health industry but is now having a much broader influence. 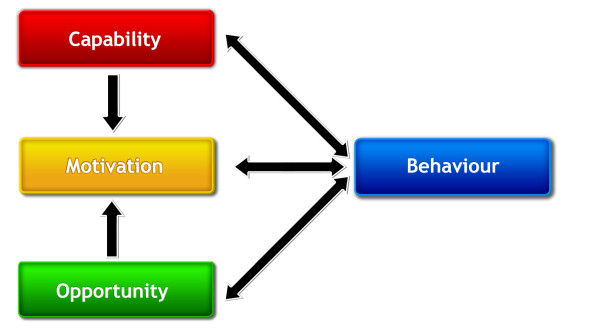 So how can COM-B help improve survey response rates?

Let’s look at each of the components of COM-B in turn. A nice metaphor for COM-B comes from detective stories. We all know that the suspect must have had the means (capability), motive and opportunity to have committed the crime…

While it’s easy to dismiss capability as a factor in survey responses, because of course you use survey tools that are designed with the user experience in mind, and we are now in an age of near-universal digital literacy (at least to the level required to respond to a survey), let’s not overlook it entirely.

If you started with the following assumptions, you might not go amiss:

So while your people may not need to be educated on how to respond to surveys, communication is critical. They need to know that it’s important, that they have permission to spend time doing it, the instructions need to be clear and they may well need a reminder. Use multiple channels, for example, email, posters, intranet, video – and if face-to-face communication comes from their line manager that ticks multiple boxes. And if you have a manual workforce, literacy could still prove to be a barrier.

Additionally, your workforce is neurodiverse and therefore some employees may find it difficult to respond to surveys that are over-reliant on colour, particular fonts or, for example visual ‘sliders’. These issues arguably take us into the territory of opportunity because your survey design could be a barrier to participation.

Opportunity can be categorised as physical or social, and so too can potential barriers.

The barriers that a dyslexic employee (for example) might experience may be largely physical – for example, fonts that are difficult to process, but that’s not always the case because supportive colleagues, for example, create social opportunity.

Physical opportunity might include the ready availability of technology, which might not just mean being provided with access to a device, but with enough proximity or indeed numbers to make it practical to use them.

Social opportunity is about building norms, making it acceptable or desirable to respond through modelling. It’s one thing that managers complete the employee survey as individuals, but it’s another that they share with their teams that they’re doing it on company time.

If line managers are key to survey response rates, should they be given a completion target for their team? This is a tricky question, to which many HR people would automatically respond “no”, but I’m not sure. There are two things to consider:

I still wouldn’t rule out giving line managers a target, particularly in an environment with very low participation rates, but I also wouldn’t encourage it. There will always be a trade-off between the data gained, possibly the data quality (if people feel that they are being coerced), but more specifically the undermining of motivation to participate.

When it comes to motivation, the intrinsic motivation to act is broadly considered to be desirable. When a person chooses to engage in behaviour without the promise of a reward (or punishment), or in other words the activity is the reward in itself, then they are said to be intrinsically motivated. When they are given a ‘contingent’ reward for performing the behaviour they are extrinsically motivated.

Research has shown that when you directly reward things that people would happily do anyway, they can become less motivated to do them because their intrinsic motivation (which is more powerful) is reduced.

These three needs give some powerful clues to improving employee survey rates:

First, the need for autonomy emphasises the importance of giving people the free choice to participate (or not). It also highlights the importance of acting on results and emphasising that the survey will be used to create change. It represents one way of influencing the organisation, its culture, and its management practices.

The opportunity to influence their working environment is fundamental to driving employee survey response rates, but the flip side is that when the results are not acted upon it builds a sense of helplessness and the broken ‘contract’ promotes cynicism.

Second, the need for competence suggests that you might emphasise that the survey will help to identify where people’s need to develop, grow or progress could be improved. It might be used to improve access to the tools for the job, processes that make it easier to succeed. You might also appeal to the desire to ‘win’ collectively, as an organisation.

Finally, the need for relatedness might mean that people will respond well to opportunities to improve collaboration and trust in the organisation. It might be effective to remind people that it is not only their opportunity to speak their mind but to help improve the experience of their colleague too. And of course, if you can connect the annual survey to the broader purpose of the organisation, that will help.

COM-B also distinguishes between ‘automatic’ and ‘reflective’ motivation. Automatic motivation is about the immediate emotions and mechanisms such as incentives and rewards that may be intrinsic or extrinsic. Reflective motivation is more nuanced and learned over time – and includes things like our beliefs, values and identities.

It’s therefore critical when thinking about all of the factors that might boost employee survey response rates, to consider the historical and cultural context. While it’s easy to advise about what tactics to use to improve response rates, it’s harder to do it, because you have to consider what will work here and now.

How might our cultural values impact upon survey responses, for example, our relative openness or desire for privacy? Do our people tend to conform? How individualistic is the culture, and so on…

You may have to overcome cynicism and mistrust because of what’s happened in the past, or you might inherit a situation where people are willing to give their views freely because surveys have been well-managed and have demonstrably led to change.

That’s why we work closely with our clients to help them develop their plan for maximising participation in their employee survey and, by implication, driving more insightful results and meaningful change for their people.

(Check out our guide to running employee surveys](https://pxhub.io/blog/guide-to-employee-surveys-1-design))